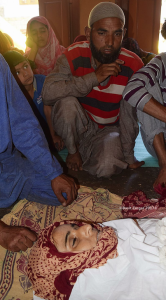 This is Ghulam Rasool Chopan mourning the death of his 38-year-old wife Tahira Begum. She went out early morning yesterday to get her 17-year-old son from the middle of a protest against a hunt to kill operation by the Indian occupying army. The army opened fire on the unarmed protesters, shooting her in the heart from the back. Four others sustained bullet wounds, including one who died on the way to hospital.

Tahira was a deeply pious woman who committed her life to her family; she is survived by three children & her husband.
As Ena Husain would ask: where are the condemnation brigades so up in arms last week about the death of the undercover policeman who shot into a crowd of protesters? Do we hear the sound of silence?