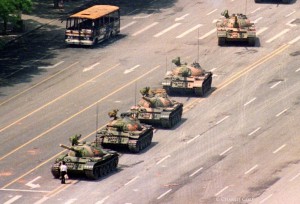 On the 28th anniversary of Tiananmen Square: the unknown Chinese democracy protestor known only as “Tank Man” (whose fate remains unknown) stands as testimony to the power of resistance & to opposing the falsification of history by those who deny a massacre ever took place.

Today, thousands will protest in Hong Kong, as they do every year, to commemorate those who fought & died in Tiananmen or later in Chinese prisons. Icons of democracy like Tank Man & Li Wangyang will be honored.

We honor not only our Chinese brothers & sisters but the thousands of men, women, & children from China to Syria, Kashmir, Palestine, Venezuela, Yemen, Iraq, Bahrain, Morocco, India, Afghanistan, Myanmar, & everywhere tyranny is opposed who carry on the highest tradition of humanity to resist oppression & fight for human freedom.