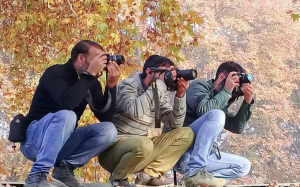 There is a noticeable decline in the quality of news photojournalism published in major media. It’s an extremely dangerous profession because photojournalists put themselves on the front lines of social conflict & war. They are also targeted by regimes who do not want ugly truths exposed. One picture is often worth a thousand lies.

The decline in war photojournalism has to do with censorship & compromised journalists willing to embed themselves up the ass of the military, thus reducing themselves to propagandists. There has been no meaningful photojournalism from Yemen, Afghanistan, Syria, Iraq, Somalia, Libya for years. There are however still many daring & committed photojournalists who place themselves at risk to report via social media what Reuters, the Guardian, & other major media avoid. Palestinian & Kashmiri photojournalists have distinguished themselves in this regard–as have those like Shafiur Rahman who is reporting from Bangladesh on the Rohingya refugee crisis.

This wonderful photo is three Kashmiri photojournalists (I think the middle man is Basit Zargar) who are playing an extraordinary role even though one fellow was recently arrested by Indian occupying forces. We should take a moment to honor the invaluable contribution they make to educating people around the world & to building solidarity with one of the most important freedom struggles in the world.