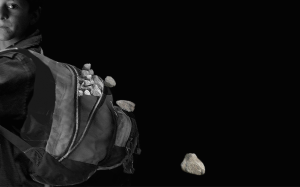 A stone pelter with ammunition in his backpack, by Kashmiri artist Masood Hussain:

India & Israel have criminalized stone pelting & severely punish children & youth who engage in it, including with the the use of lethal force & lengthy jail sentences. Stone pelting is certainly not a strategy to end the occupation but we cannot accept criminalizing it or even moralizing about it as violence. It isn’t antisocial hooliganism but a method used to thwart & distract the occupying forces & to protect unarmed protesters–if not also to vent youthful anger at the extreme violence & humiliation of occupation. The very fact that Israel & India so harshly punish stone pelters speaks to the role they play in the struggle against occupation. A stone pelter armed with a political strategy is a force that can end occupation.