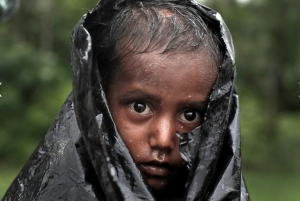 The UN refugee agency announced today that an estimated 582,000 Rohingya refugees have arrived in Bangladesh since August 25th; that 10,000 to 15,000 have crossed just since Sunday night at only one crossing; that up to 15,000 are still stranded on the Burma side of the border. Several other sources report that there is no let-up at all in the surge of Rohingya fleeing for their lives from villages which are still being torched.

Photo is a Rohingya child living without shelter in Cox’s Bazar, Bangladesh.