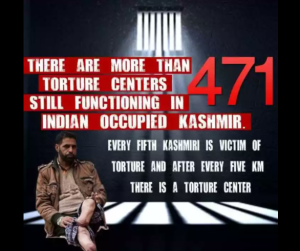 Voice of Victims, a human rights group in Kashmir, reported in 2014 that the Indian army maintains 471 torture centers in Kashmir, that every fifth Kashmiri is a victim of torture, & that there is one of these Guantanamo-like centers every five kilometers.

The use of torture in Kashmir has been documented by Wikileaks, the International Committee of the Red Cross, Amnesty International, & of course the Jammu & Kashmir Coalition of Civil Society (JKCCS). Kashmiri activists on social media have released countless incidents of beatings, assaults done publicly but behind closed doors in the torture centers, the occupying army goes Guantanamo.

Methods of torture include electrocution, beatings, being suspended from the ceiling upside down, inserting chili powder in private parts, sprinkling salt or pepper on wounds, cutting or mutilating, stripping & keeping detainees naked during torture. sexual abuses, leg or arm stretching, inserting iron rods, waterboarding, sleep deprivation, crushing of legs by putting a bar across the thighs & sitting on it, humiliations of all kinds.

This is a UK Channel 4 documentary done in 2012 which interviews JKCCS founder & president Pervez Imroz, a noted human rights lawyer & activist in Srinagar,