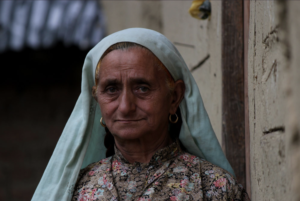 This is Shahmali Begum who is nearing 90-years-old. She is the mother of Maqbool Bhat, a man who came from a peasant family, went on to become a school teacher, & then to become a leading voice of Kashmiri freedom. He was hung & buried unceremoniously at Tihar Prison in 1984.
Maqbool was the eldest of Shahmali’s five sons. Her son Habibullah was forcibly disappeared when he went to meet Maqbool at Tihar Prison before his execution. Ghulam Nabi & Manzoor Ahmad were both killed in separate encounters with Indian Army forces. A fifth brother Zahoor Bhat lived in Pakistan-administered Kashmir for 20 years & returned in 2009 to address a public rally in their home town of Trehgram in Kupwara on the 25th anniversary of Maqbool’s death. The J&K police & CRPF special forces cordoned the village early in the morning & arrested him. He has been detained six or seven times since then under the Public Safety Act.
Shahmali continues to work tirelessly to have Maqbool’s remains returned for respectful burial in Kashmir. It is really no wonder that she produced five sons for the Kashmiri freedom struggle.
This video by Fahad Shah is about Shahmila & has footage of Maqbool’s speeches which shows what a remarkable orator he was: