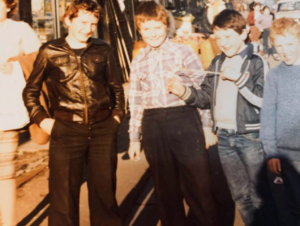 In response to some who apparently think me too tolerant of stone pelters in Palestine & Kashmir, even encouraging of them: In 1983, I was in Belfast & Derry, Northern Ireland because the hunger strike had just ended. British occupying forces constantly ran convoys of armored vehicles throughout the cities with rifles on turrets swiveling to point directly at children on their way to school, young mothers with their baby strollers, & elderly pedestrians. When I put my camera up to take a picture of a gunman, he aggressively directed his rifle right at me. At one time in Derry, a convoy drove up & dozens of soldiers rifles in hand climbed out encircling me in their operation, heedless of my fear or safety.
A group of small boys between 8 & 10 toured me through the Catholic neighborhood in Belfast to show me the many murals put up to honor the hunger strikers like Bobby Sands. Every time a convoy of armored vehicles passed by, the boys would pummel them with rocks. I was terrified & struck by their courage. The boys may have been showing off a bit to a Yankee coward but this was in fact their ritual. I understand stone pelting. I understand its motivation. I understand the class it comes from. At least I think I do. But mostly, I would never condemn youth who stand unarmed against oppression for choosing the only weapon at their disposal. Stone pelting isn’t antisocial behavior against a colonial occupation. The oppressed have the right to defend themselves by any means necessary.
(Photo is the stone pelters of Belfast, 1983)