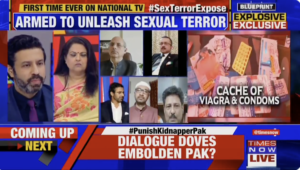 Indian media Times Now had a report on a cache of condoms, contraceptive pills, viagra, & porn recovered from ‘Jaish terrorists’ in Kashmir. The report claimed the terrorists were going to use them to ‘unleash sexual terror’ on Kashmiri women who support India. They bristled with indignation, demanded condemnations, & asked why the abrogation of Article 370 has not ended the exploitation of women in Kashmir. This isn’t just where nationalist propaganda shades into farce. It is a cynical ‘war on terror’ attempt to portray the colonial occupation of Kashmir as a way to advance women’s rights–which is exactly how the US, Europe, Israel, Syria use ‘war on terror’ Islamophobia to justify war, occupation, genocide.
Kashmiri women, & for that matter many Kashmiri men, would be the last to claim Kashmir is a bastion of female liberation. But only a fool would think the Indian Army or Modi regime have any part to play at all in the freedom of women anywhere. India has colossal problems for women & children including considerable child sex trafficking slavery & one of the highest rape rates in the world. Kashmiri women & human rights activists have exposed the Indian Army’s use of mass rapes as a weapon of occupation & social repression & also report on the number of boys sodomized & sexually tortured while incarcerated as political prisoners. We would like to know how the twisted mind of a nationalist can overlook all the alarming data about women & children in India & the Indian Army in Kashmir & pretend to the world that the Indian Army will bring women’s liberation to Kashmir. It is exactly what the US Pentagon & its rightwing feminist supporters claimed about the now 19-year occupation of Afghanistan. And all they have to show for it is millions of refugees, millions of homeless, thousands of orphans, thousands dead, & that damn nail salon in downtown Kabul.
The safety of women in Kashmir demands the immediate, unconditional withdrawal of all Indian forces.
(Photo is screenshot of Times Now broadcast with Rahul Shivshankar on India Upfront)