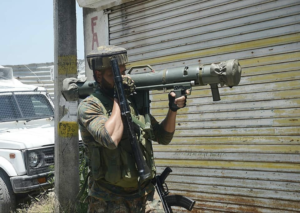 There was an Indian military operation last night in the Zadibal & Zoonimar Pozwalpora areas of Srinagar. It was a joint operation of the J&K police with Rashtriya Rifles & CRPF special forces. Since the Modi regime can’t even tell the truth about its confrontation with Chinese troops in Ladakh, we can’t be sure what is true in its reports about military operations in Kashmir. Nationalist media has an ironclad formula to report these operations which obviates the need for any real journalism. The formula is: Indian Army set up a cordon around an area after getting tips that armed militants were hiding there; Army starts vandalizing & destroying family homes only after the militants begin shooting; ‘terrorists’ are killed.
Indian officials report that last night they brought in the parents of the young men they were hunting to persuade them to surrender but the young men still refused. That must be when they brought in the bazookas. If you can’t persuade them to come out in the open to be shot down in front of their parents then destroy the entire area. Nationalist media reports that three terrorists were killed & two guns recovered. Does that mean there were only two guns between three men? Did it take Carl Gustav bazookas in a densely populated urban area to hunt down three men with two guns? The Army alleged the young men were involved in the killing of BSF border patrol troops in the Pandach area of Srinagar last month. Is the Carl Gustav how the Indian Army administers due process in Kashmir? Does an allegation make the bazooka judge, jury, & executioner?
India has been using Carl Gustav bazookas since 1976 & makes the M2, M3, & M4 in its ordnance factories. It’s not certain if the one in this photo is the M3 or the newer generation M4. It’s a gun used by 40 countries including by US-NATO forces in Afghanistan. When the Swedish manufacturer Saab boasts of its versatility, we should keep in mind that the Carl Gustav of every generation is a primary weapon of terrorism, not an instrument of liberation. Out of its many versatile functions, the Indian Army in Kashmir uses it mainly to blow up family homes & lay waste to entire areas.
When Swedish moochocrats Carl Gustaf & his wife Silvia paid a state visit to India in December 2019 at the height of the lockdown, the old boy said Sweden has had observers in Kashmir ‘for many many years’. Well at least since India began using the Carl Gustav in Kashmir to make sure it’s operational & suited for destroying family homes, certainly not to monitor the human rights situation since he refused to comment on that. When asked if Sweden would make any offers to mediate on Kashmir the old boy boy cited a policy of not commenting on political issues. He lets the bazooka speak for Sweden. Carl & Silvia Gustav should have gone to Kashmir to see how their ‘observers’ are working out but as part of greenwashing the occupation, they went to the Versova seafront in India for a beach clean-up of plastic. Very much like Modi going to the UN last September & talking about getting rid of single-use plastic bags rather than the lockdown.
Kashmir is an unarmed civilian population. There is no place for bazookas or pellet guns. Stand with Kashmiris & demand the immediate, unconditional withdrawal of all Indian military forces from Kashmir.
(Photo of Zadibal & Zoonimar Pozwalpora by Basit Zargar)