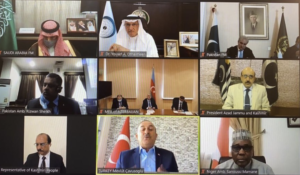 The Contact Group of the Organization of Islamic Cooperation (OIC) on Jammu & Kashmir held a virtual meeting on Monday, June 22, 2020 & issued a statement calling on the UN to ‘make India (which is not a member of the OIC) abide by UN resolutions’ & engage in dialogue to ‘calm the situation between Pakistan & India’. The Kashmiri struggle can’t go far with that kind of wooden rhetoric that manages to exclude the Kashmiris & turn the occupation into a territorial dispute between India & Pakistan!
The OIC is primarily a trade organization, not a human rights organization. Its members include some of the most repressive regimes in the world like Egypt, Syria, Bahrain, Saudi Arabia, Iran. Its campaign for Kashmiri self-determination will be as full of resolutions & as devoid of action as its resolutions about the Rohingya genocide. The OIC has the authority to call on its members to boycott India but they don’t feel that strongly about human rights that they would jeopardize trade & investment.
Kashmiris & their supporters can use the OIC statement to pressure the UN & India but in the long run the OIC will follow the money, not the voices of Kashmiris demanding an end to the occupation & self-determination.
(Photo is screenshot of virtual OIC meeting on June 22, 2020)