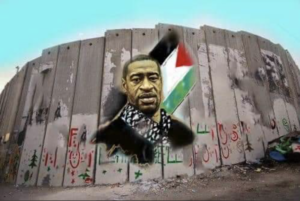 Street graffiti & murals are being painted all over the world to honor George Floyd & protest racist violence against the Black community in the US. This mural done by Palestinians was painted on the apartheid wall. Zionists & Hindutva nationalists are having a lot of trouble with this new movement since so many activists make the links between racist violence in the US & the occupations of Palestine & Kashmir. One Zionist writer wrote “Jews share the pain of those who protest racism. But extremists who link this crime to Israel’s efforts to defend itself against Palestinian terror are spreading a big lie.” Given the long history of pogroms & the holocaust, it is absolutely true that Jews share the scourge of persecution. As a result, they have long played a progressive role in civil rights struggles. But Zionism is corruptive because as an ideology & political force it threw in its lot with colonialism & white supremacy in order to broker a better deal for Jews. They used terrorist death squads to forcibly evict Palestinians from their lands & then vilify Palestinian resistance to colonialism as terrorism.
You see the same political disconnect with liberal Indian nationalists who are all over social media with their ‘Black lives matter’ placards whilst defending India’s occupation of Kashmir as a fight against ‘Pakistani-sponsored terrorism’. Assadists have the same reaction to the George Floyd mural done in Idlib by participants in the Syrian Arab Spring because one of the artists said George Floyd’s death reminded him of the Syrian civilians who were “killed by suffocation after the Syrian regime hit them with chemical weapons.”
When it comes to liberation politics, you can’t have it both ways. You can’t play both sides of the street. You can’t be for ethnic, religious, nationalist supremacy in one place & against it in another. It isn’t just a matter of cognitive dissonance. Some Zionists, Hindutva nationalists, & Assadists only give lip service to the Black civil rights movement to dissemble, to make it seem as if there are affinities between hate-mongering, racism, genocide & the liberation struggles against them. Is it also because Zionists, Hindutva, & Assadists cannot so effectively use Islamophobia to impugn the Black community because of the dominance of Christianity?
(Photo of Palestinian mural on apartheid wall)