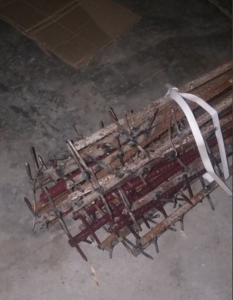 Since it’s Indian nationalists reporting it, we don’t know if Chinese soldiers are actually using nail-studded bats & rods against Indian soldiers in Galwan Valley, Ladakh, or not. Savagery is a common denominator in militarism so it’s possible. Such violence is what US torture prisons are all about & is just like the sticks, rods, & cables used by Indian soldiers against Kashmiris. Like the rods they use to hit protesters with or to give electric shocks to political prisoners. Like the rod special forces commandoes shoved in the mouth of 8-year-old Sameer Ahmad Rah after they beat him to death in 2010.
There’s a lot of tribute being paid to Indian soldiers who have died in Galwan Valley. Some are simple condolences, as is fitting. Some are nationalist fulminations about ‘fallen heroes’. The Indian soldier is no more a hero in Ladakh than he is is Kashmir or than a US soldier is in Afghanistan, Iraq, Syria, Yemen, or anywhere else. China has no more rights to Ladakh than it does to Tibet. Nor does India. We should demand the immediate withdrawal of all Chinese & Indian troops & leave the sensationalism to nationalists.
(Photo of nail-studded rod that Chinese troops are allegedly using in Ladakh)