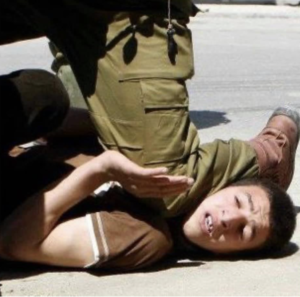 This image of a Palestinian boy being held down on the neck by an Israeli soldier has been shown hundreds if not thousands of times on social media going back to at least 2013. He’s been identified differently on many posts or not identified at all & has now become a poster child for Israeli brutality against Palestinian children. The most reliable report is that he is an 11-year-old boy in the West Bank near Bethlehem in an incident of Israeli violence in 2013.
The photo is being circulated now because the knee chokehold on the neck is the same that Derek Chauvin & the other two cops used to murder George Floyd. We don’t know if Minneapolis police have been trained by Israeli police personnel but this photo suggests that the knee chokehold is an established police practice & not, as apologists claim, a result of poor police training.
This brutality explains so much why Black activists have forged political ties with Palestinian activists. The oppression they suffer is of a kind.
#StandWithTheBlackCommunity
#StandWithPalestinians
#StandWithKashmiris