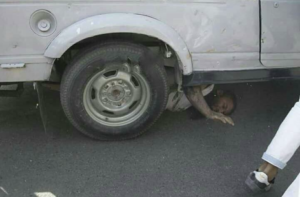 Today we honor the memory of 21-year-old Qaiser Amin Bhat who on June 1st, 2018 was run over & killed by an Indian Army armored vehicle at a protest outside Jamia Masjid in Srinagar. Two other protesters were also run over by armored cars & sustained injuries. Earlier, on May 5, 2018, Adil Ahmad Yadoo was crushed to death by a police armored vehicle in Srinagar. There has been no accountability by the police & army for these crimes. “I can’t breath” is the anthem of the oppressed.
Stand with Kashmiris & demand the immediate, unconditional withdrawal of all Indian forces from Kashmir. May Qaiser Amin Bhat & Adil Ahmad Yadoo Rest In Peace.
(Photo by Aman Farooq/GK)