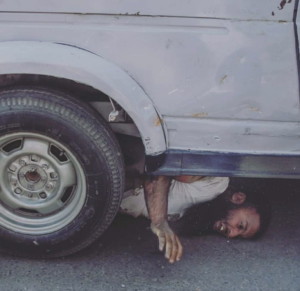 “As the killing machine decides to distribute roses, we remember the roses they crushed staining the roads crimson and the countless blossoming rosebuds (adde phael goulaab) we had to bury.”

(The photo, taken by Pulitzer winner Dar Yasin on June 1st, 2018, is a Kashmiri man shouting for help as an Indian military vehicle runs him over during a protest in Jamia Masjid, Srinagar. Three people were injured, one of them seriously, after they were hit & run over by military vehicles.)