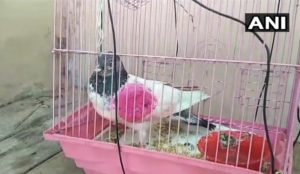 Whilst 10,000 Chinese troops are amassing against Indian forces in Ladakh, Pakistan is escalating its flocks of spy pigeons along the Line of Control. A suspected spy pigeon was hauled in today for questioning but this is not the first time Pakistan has used pigeons as avian terrorists against India. In May 2010 & in May 2015, spy pigeons were arrested by Indian forces, kept under armed guard in a special air-conditioned room, & denied counsel. Hidden surveillance cameras attached to their wing spans have not been detected but officials believe the pigeons are ordered to poop their brains out when they fly over Indian troops. This is a war crime as defined by the Modi regime & must be prosecuted in an international tribunal.
This photo is the culprit just arrested on the Line of Control & accused of Pakistani terrorism against India. He claimed in interrogation that he just missed his flight path going back home but he was packing an AK-47 under his wing. He will be held for prosecution in one of India’s kangaroo courts.
(Photo from ANI)