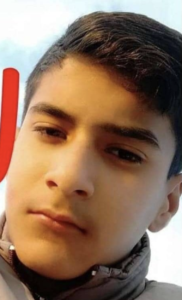 Twelve-year-old Basim Aijaz, son of Aijaz Ahmad of Chota Bazar Karan Nagar, died today at SMHS hospital in Srinagar from injuries he sustained in a house collapse when J&K police & Indian CRPF special forces conducted military operations in the Nawakadal district of Srinagar. Three others were also injured but there is no report yet on their condition. Basim was a class 7 student who had no relationship whatsoever to terrorism but only to resistance to occupation.
May young Basim Aijaz Rest In Peace as we honor his memory by standing with Kashmiris & demanding the immediate, unconditional withdrawal of all Indian forces from Kashmir. Our heartfelt condolences to his family, friends, & Kashmiris grieving the loss of another child.
(Photo of Basim Aijaz from ITV, posted May 20, 2020)