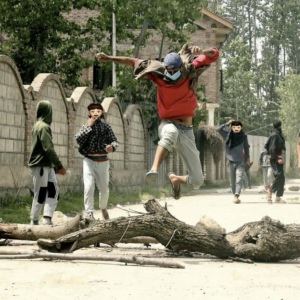 These young men in Budgam, Kashmir are protesting the Indian Army execution of 25-year-old Mehrajudin Shah who was shot in the back & then vilified as lawless. Young men are a primary target of the occupying army & such a fate is possible for any of these young guys whether they are protesting or just driving to work like young Mehrajudin. That is exactly what Riyaz Naikoo meant when he said, “Occupation bullets do not make a distinction between civilians & fighters, nor do its prisons.” A Kashmiri can be an armed militant or an apolitical civilian but the Indian Army makes no distinction when it comes to dispensing violence.
Stand with Kashmiris & demand the immediate, unconditional withdrawal of all Indian forces from Kashmir.
(Photo by Umer Asif, posted May 15, 2020)