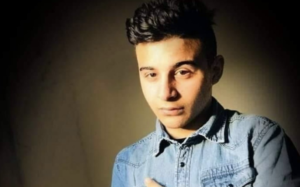 Fifteen-year-old Zaid Fadl Qaysia was shot to death & four other young men were injured this morning by Israeli occupying forces who raided the Al Fawwar refugee camp near Hebron in the West Bank. It is common for Israeli forces to raid refugee camps & villages as a strategy of occupation & genocide. Young Zaid was standing on a rooftop watching the raid on the camp when he was shot in the head & killed.
Palestinian solidarity has been impacted by Assadism & has been quiescent at a time of escalating genocide & ethnic cleansing. Because of its political affinities with the anti-colonial struggle in Kashmir, both freedom struggles can be considerably strengthened by integrating them in solidarity activities, as many are already doing.
May our little brother Rest In Peace.
(Photo is Zaid Fadi Qaysia, posted May 13, 2020)