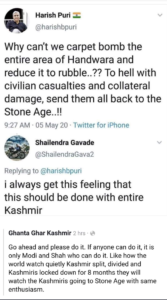 Retired Indian Army officer Harish Puri has removed this tweet but not before several had taken screenshots. His amen chorus is fellow Hindutva nationalists. This genocidal sentiment was frequently espoused by supporters of the Vietnam War & we all know what happened to the US Army forced to scurry like rats off a sinking ship when it was defeated by the Vietnamese.