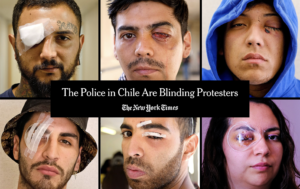 This is the cover photo to a video nominated for the 2020 World Press awards about the use by Chilean police of pellet guns & rubber bullets to blind protesters. There have been no international campaigns opposing the use of pellet guns against the 2011 Arab Spring uprising in Bahrain, their use by the Indian occupying army in Kashmir, or the use of Israeli snipers to shoot out the eyes of Palestinian protesters. So it doesn’t take a Nostradamus to predict that inevitably other governments would start employing the same barbarism against protesters. Chilean police are now directly targeting the eyes of protesters to permanently disfigure, disable, & demoralize them because it has been so effective & so unchallenged in Bahrain, Kashmir, & Palestine.
If we do not want this savagery to be adopted by our own governments, we are advised to make a hell of a clamor & organize a systematic political defense opposing the use of pellet guns, rubber bullets, & snipers against unarmed protesters.
You can watch the nominated video here: https://www.worldpressphoto.org/collection/storytelling/2020/39747/Police-in-Chile-Blinding-Protestors-OVY-nominee?