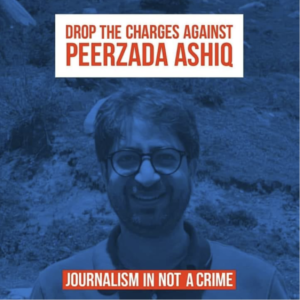 Kashmiri journalist Aasif Sultan was arrested in September 2018 & remains in jail for an article he wrote profiling Burhan Wani. Today, photojournalist Masrat Zahra was charged with inciting youth with her powerful photos & Peerzada Ashiq, a journalist with The Hindu was summoned to be interrogated by a police official 40 km from his home in Srinagar. He has since been charged for an article which authorities claim was factually incorrect & which ‘could cause fear or alarm in the minds of the public’. An additional offense was that it was published without seeking approval from police authorities.
Clearly, India is accelerating its attacks on Kashmiri journalists who have been fearlessly protesting the repression for several years. Their courage equals that of Rohingya citizen journalists who reported from Arakan state whilst under genocidal siege from the Burmese Army & that of Palestinian journalists who report while being targeted by Israeli snipers.
#StandWithAasifSultan
#StandWithMasratZahra
#StandWithPeerzadaAshiq