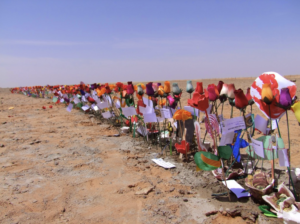 A friend proposed using the lockdown for a project to study freedom struggles around the world. The point is to learn together about these freedom struggles so that we will emerge from quarantine in a stronger position of international solidarity with our oppressed brothers & sisters. The struggles would include Palestine, Syria, Iraq, Kashmir, Uyghur, Rohingya, Sahrawi, West Papua, Nauru, refugees, the Libyan slave trade, Somalia, Yemen, Indigenous struggles in Latin America, Africa, North America, Asia. Others are invited to participate in the project where one would write a brief presentation about an aspect of a freedom movement & then share it with us on social media. This is the first presentation about the Sahrawi freedom struggle in Western Sahara with the story, a photo & a poem from the struggle, & a video documentary.
*********
Many of us remain unaware of the last colony at the western coast of Africa, the Western Sahara with a population of 600 000. During colonisation, Spain took control of Western Sahara and France took control of Morocco. In 1956, Morocco gained its independence from France and then in 1975 proceeded to invade the Western Sahara. When Spain left, Morocco, Mauritania and the Polisario, an independence movement, fought over Western Sahara. Mauritania eventually renounced its claim and backed the Polisario. The UN brokered a cease-fire in 1991 and the parties agreed to a referendum in which the people would vote for independence or Moroccan authority. The vote never happened.

Morocco built a 2,700 km sand wall (or “berm”) in the nineteen-eighties. It is the longest defensive fortification in use today and is surrounded by watch towers, land mines, electric fences, and barbed wire. Morocco controls three-quarters of the area west of the wall. Sahrawis are the indigenous ethnic group forced to live in Moroccan-controlled areas or in Algerian refugee camps. The Sahrawis have been displaced and have become refugees in their own lands. Their cities are occupied, under total surveillance and they suffer total repression and militarisation. Sahrawi journalists, students and activists are often arrested and tortured and for the most part their plight exists under a media blackout. They are still waiting for the referendum that will decide their fate.

Children of the Sun and the Wind
We still live
on the brink of nothingness,
between the north and south of the seasons

We still sleep
on stone pillows,
like our fathers

We still follow the same clouds,
resting in the shadows of thorn trees

And in the distance
at the edge of the mirage
we still watch, every evening
the sun fall into the sea

She greets us, then is lost
in the eyes of a child
smiling from the lap of eternity

Mould Yeslem has led and organized the project “Por Cada Mina Una Flor”—For Every Mine a Flower, which collects flowers with written messages of solidarity with Sahrawis and plants them in front of the berm.