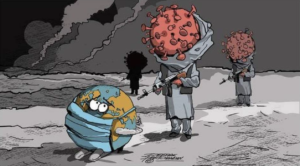 What kind of mentality uses a deadly epidemic to ratchet up campaigns against Muslims?

“Meanwhile #The_Hindu has published this Islamophobic Rasict Cartoon depicting Muslims wearing ( turbans ,kurta/Pajamas/Khan dresses) peculiar to Pakistan/Kashmir and Afghanistan as Epidemic for the whole World….
It shows how the National newspapers of India have a strong Bias against Muslims of these places .They never published such an article or view condemning the killing of Innocent Muslims by Mobs and by armies of other religions ..
Yesterday’s attack on innocent Sikhs in Kabul is the handiwork of same agencies of the world who have in the past killed them in places like #chattisinghpora etc to be alleged on Muslims ….
#The_Hindu should be pulled down for this cowardly blasphemous cartoon damaging the image of Innocent Muslims around the Globe and hurting their Souls ….
#Shame_The_Hindu”