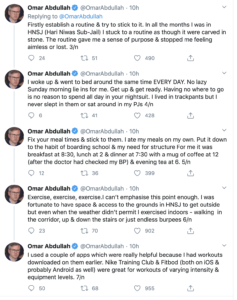 This is how Ahmed Bin Qasim described his mother’s incarceration as a Kashmiri political prisoner in an Indian jail:

“Two of our three female political prisoners are 50+ & suffering from co-morbidities that have worsened over time in prison due to lack of proper medications. This puts them in a high-risk group & makes them more vulnerable to this deadly virus as proven by fatalities around the world. The prison condition is most unfavorable & does not follow any WHO basic guidelines. The prison is crammed full & disease-ridden. No proper sanitization & hygiene are available. Prisoners are served meager food in polythene bags.”

This screenshot of a tweet is how Omar Abdullah described his detainment in a luxury guest house in Kashmir: a debate over staying in pjs or putting on sweatpants; home made meals with coffee & tea time; regular exercise, including outdoors; workout apps so he’d remain trim & fit in detainment. Not exactly a gulag nor a place with torturers & executioners on staff.

In Abdullah’s description of his time under detainment, it is cringe-worthy how tone deaf he is, how insular to the conditions of hundreds of young boys, men & women held in barbarous conditions, like Ahmed’s mother & father. There is no comparison possible between his experience & that of Kashmiri political prisoners. He was on a retreat, albeit a forced one. They remain in a gulag.

(Image is screen shot from Omar Abdullah on Twitter)