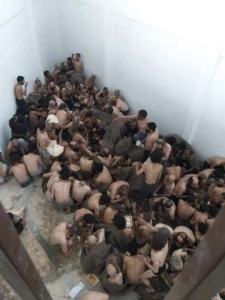 There is some dispute about the origins of this photo: whether it’s from an Iraqi prison or Assad’s gulag. Could be either. Could also be human rights activists jailed in the Philippines for opposing the vigilante war against the urban poor, or Kashmiris in Indian jails, Palestinians in Israeli jails, Uyghur in Chinese jails, Rohingya in Burmese jails. Wherever & whenever it is from, this is the condition sustained by thousands of political prisoners as the world enters an uncontrolled epidemic. Several days ago, Assad declared an amnesty for prisoners but it isn’t certain at this point that it includes political prisoners, the tens of thousands, including women & children, who dared stand against a police state.

Our demand, even from quarantine, must be the immediate release of all political prisoners as well as demands for comprehensive healthcare programs for those who remain detained for crimes like murder or rape.