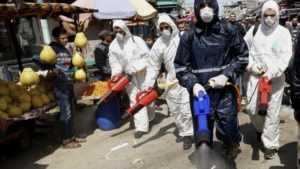 Today, Palestinian health officials report the first two cases of coronavirus in Gaza. The two individuals who are now in quarantine had recently returned from Pakistan. Hundreds of Gazans have recently returned home but only 92 have been examined because of the weak healthcare system as a result of Israel’s 13-year blockade & repeated bombing campaigns. Over 1,270 people are quarantined at hospitals, hotels, & schools after crossing into Gaza from Israel & Egypt. In the West Bank, 55 cases have been diagnosed. No deaths from the virus have been reported in occupied Palestine. It’s what’s called a ‘ticking time bomb’.