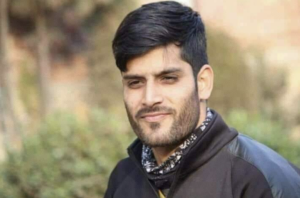 Kashmiris are commemorating the one-year anniversary of the torture & murder of Rizwan Pandith while in police custody. Rizwan was a school principal in the Pulwama district of South Kashmir who according to his brother Mubashir was taken in a night raid at their home by Indian agents & J&K police. MudaSir NaZar quotes Mubashir as saying Rizwan “was brutally tortured; his left eye had turned black & his head bore two stitches; the body showed clear burn & cut marks making it obvious that they had used a hot iron over his thighs & some cutting tool as well; the cuts were deep & his spine broken”.

There were protests after the killing of Rizwan, including by students at the school where he was principal.

Our condolences to Rizwan’s family, friends, & students & our fullest solidarity with your struggle for self-determination & freedom. May Rizwan Rest In Peace.