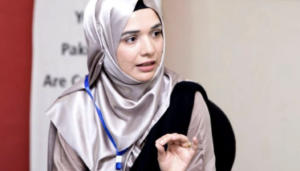 I have attempted to post a published statement titled ‘Shaista Safi’s Stance on Indian Atrocities in Kashmir’ which she made just after the lockdown of Kashmir in August 2019 & got repeated notices that it violated community standards.

“Curfew and other restrictions continue on the 25th day, today, in Indian occupied Kashmir (IoK). Despite of living in the 21st century, the people of Kashmir are unaware of the fact that what is happening next door. They have no idea whether their neighbors are even alive or dead.
While talking through Skype on a private TV channel, Shaista Safi, a Kashmiri journalist in Britain, told that it has been 25 days since she is unable to contact her own family living in Kashmir.
She further said that the entire world knows that whatever is happening in Kashmir is a clear violation of human rights. Moreover, in 1947, when the issue was raised in the United Nations (UN), people didn’t know much about the issue but we had a clear about it and it’s solution.
Furthermore, she claimed that the issue has been reported by the international media all across the world including The New York Times, The Guardian, BBC and Al-Jazeera. This is the first time ever that the international media is giving proper coverage regarding the Kashmir Issue.
While talking about the situation in Kashmir, Shaista Safi said that women are still not safe in the region and rape is being used as a weapon of war in IoK.
“We know that women are living their lives as half-widows, we know that pellets are being used on children, we know that people are starving to death and we even know that the people of Kashmir know that if they leave their houses either they will lose their sight by being hit by a pellet or they will lose their life by being hit by a bullet,” said the British journalist.
While talking to a private TV channel, she said that all those who are making fun of the people who are expressing solidarity with Kashmir by coming on the streets should know that the Kashmiris stand united with Pakistan. They should keep in mind that the Kashmiris leave their houses holding the national flag of Pakistan knowing that there is an army of 700,000 standing outside reading to shoot them. They leave their houses while raising slogans in the favor of Pakistan.
Today, it was a symbolic message of brotherhood and solidarity by the people of Pakistan.
While talking about the efforts made by the Government of Pakistan (GoP), Shaista had to say that Pakistan, since its inception, is making extraordinary efforts for Kashmir. Pakistani media is also playing a pivotal in raising the voice of Kashmir internationally. Moreover, social media users and the youth of Kashmir is also making significant contributions in this regard.
We all saw that the GoP raised the voice of Kashmir in the United Nations Security Council (UNSC) and discussed the Kashmir issue with counterparts of the other countries as well.
On the other hand, the British government, apart from a few tweets, didn’t play an active role in favor of Kashmir. Although, the Pakistani and Kashmiri people living in the UK raised protests but apart from that there is silence at state level, she said.
Moreover, she said that the people are Kashmir are not asking for anything out of this world, they are demanding for the same rights and independence that were made by Bhagat Singh, Gandhi and Nehru in the sub-continent from the British.
Lastly, she had to say that there is no need to defend the Indian narrative rather we should portray the narrative of Kashmir in front of the world.
Pakistan should tell the world that it is not a Pakistani sponsored movement but this is an indigenous movement of the the people of Kashmir.”

(Photo of Shaista Safi from the banned article)