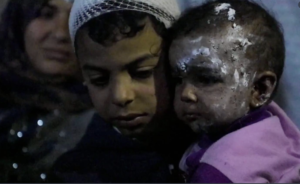 The White Helmets rescue workers report that baby Mira, who was thought to be orphaned after Syrian & Russian airstrikes on Maarat Masrin, Idlib, has been reunited with both her parents after they were found in a hospital. Her two sisters & four other family members were killed.