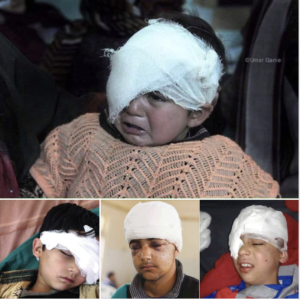 These are four Kashmiri children hit by pellet munitions. They were not part of any protests demanding India withdraw its now one million troops from Kashmir. It cannot be determined if they were struck accidentally or if Indian troops meant to do harm to small children in the vicinity of protests. Such a genocidal act would clearly not be beneath the Indian Army since it also uses forcible disappearance, mass incarceration of youth, & mass rape as means of social terrorism. India has no right to use pellet guns against protesters exercising their democratic rights to demand freedom & the withdrawal of all Indian troops from Kashmir. Opposition to the use of pellet guns in Kashmir is an international issue encompassing human & child welfare rights.

(Collage via Toronto For Kashmir)