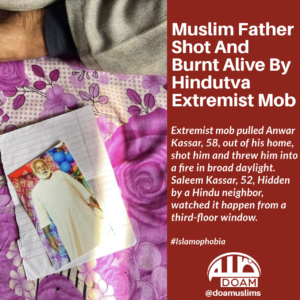 Extremist mob pulled Anwar Kassar, 58, out of his home, shot him and threw him into a fire in broad daylight. Anwar’s brother Saleem hidden by a Hindu neighbour, watched it happen from a third-floor window.

(Posted by Documenting Oppression Against Muslims–DOAM)