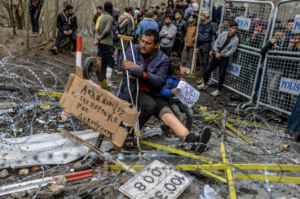 This is the scene at the Turkey-Greece border where Greek border police, reinforced with Frontex border patrol agents, are firing tear gas, water cannons, stun grenades (which temporarily blind & deafen), & even live ammo at unarmed war refugees. There are nearly four million refugees in Turkey, most living without opportunities for a humane life. In 2016, Erdogan made an unsavory deal with Merkel on behalf of the EU to prevent refugees from moving on to Greece in exchange for several million euros. Now in some kind of maneuver, Turkey opened the borders to Greece without providing the necessary political pressure & support to make the passage safe for refugees. Erdogan is treating desperate refugees, including small children & those with disabilities, like some kind of game piece in a geopolitical strategy, not like human beings. It did not, or at least should not have come as a surprise to him that Greek & EU officials would respond with such ferocious savagery to the movement of thousands of refugees.

There have been protests in Italy, France, & elsewhere against the assaults on refugees. There need to be internationally coordinated protests demanding the EU, US, & other nations open their borders to offer safe passage & asylum to all victims of war & genocide. No exceptions, no exclusions.