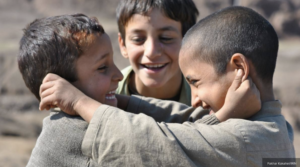 Vicky Valdez Gabay reminded me of this post from March 7th, 2017. The poem about war in northwestern Pakistan (part of the war in Afghanistan) is gruesome but this photo of children from the region is iconic in its beauty. It reminds us that women & children are always those who suffer most from war & genocide. Our antiwar principles are rooted in the protection & welfare of children, that they may inherit a world suitable for them to come of age in, to live & love in.

The magician and the boy from Waziristan

It was a stony winter morning covered in mist.
The half-awake magician answered the hurried knock
at the front door.
The boy, covered in dust and smell,
carried a big, bulky sack on his back.
It was made of coarse jute threads tightly interwoven.
A thin and flexible but armoured
metal strip looped around the mouth of the sack
to seal it.
The boy looked straight into the magician’s eyes.
“I come from far.
I remember watching you in the circus with my father.
You had cut a woman in half,
then joined her back.
They were all burnt to death after the bomb went off.
Only my mother’s body is not charred.
I bring her to you.
She is only cut in half.”

Waziristan is in northwest Pakistan bordering Afghanistan & has been subject to thousands of airstrikes, including by drones, since the US-NATO war began in 2001. Tens of thousands have fled the bombing & become refugees in their own country.

(The photo shows children of Waziristan playing & not the gruesome photos of those killed or injured by bombs.)