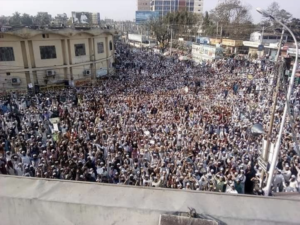 This is a protest in Bangladesh against India’s actions against Muslims. The Pakistani official who posted the photo today did not give much information about the protest, including the city it was in or when it was held. There are scattered reports of protests elsewhere in solidarity with Indian Muslims, including in Afghanistan. It’s observable, not only from the Arab Springs but from massive worldwide protests in solidarity with the Rohingya & Kashmiris, that Muslims are in the leadership of opposing the rightward shifts toward fascism. That’s one reason why they’re pumping up the rhetoric about the threat of ‘Islamist terrorists’.