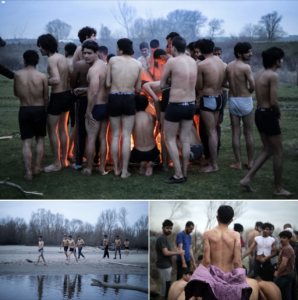 Refugees attempting to enter Greece from northwestern Turkey have been assaulted by Greek border police, including with tear gas & water cannons, & yesterday in temperatures of 56 degrees Fahrenheit/50 degrees Celsius were forced to strip to their underwear & forced back into Turkey. More than 10,000 refugees are attempting to cross. These are war refugees, primarily from Syria, but also from Afghanistan, Iraq, Iran, & Palestine.

We can express our outrage till the cows come home & wring our hands like the UN does but unless we unite internationally to demand Europe, the US, & other nations open their borders for asylum–as they are required under international law–we will continue to see hundreds of thousands of refugees suffer a living hell for an indefinite future. We cannot just leave it up to immigration rights groups since their inaction & silence are thunderous.

Open the borders. No human being is alien to us.