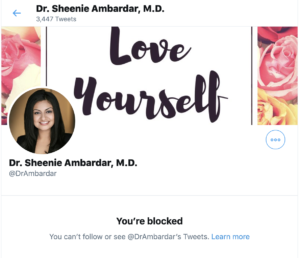 A Beverly Hills shrink named Sheenie Ambardar who calls herself the “happiness psychiatrist’ tweeted about an alleged incident in the US where an Uber driver harassed a Hindu passenger about the genocide against Muslims in northeast Delhi. Hindutva fangirl Tulsi Gabbard, who is still a candidate for US president, responded by tweeting: “Unfortunately, Hinduphobia is very real. I’ve experienced it directly in each of my campaigns for Congress & in this presidential race. Here’s just one example of what Hindus face every day in our country. Sadly, our political leaders & media not only tolerate it, but foment it.” Her tweet created the hashtag #Hinduphobia & unleashed Hindutva nationalists to protest against media coverage of the genocide as not just one-sided but hateful toward Hindus. Several insisted it was ‘Islamist mobs’ who attacked Hindus to take attention from the Modi-Trump summit.

Hinduphobia is a manufactured political malady. It does not exist in the US where in fact Hindu practices have long held pride of place in the world of alternative medicine, including yoga, meditation, Ayurveda, vegetarianism, New Age spiritualism, & libertarian politics. Sheenie Ambardar’s practice promotes all these whilst she also promotes her expertise in the happiness medications of psychopharmacology.

There may or may not have been a hostile encounter between a Hindu & an Uber driver but there is no generalized trend in the US nor likely most European countries where Hindus are targeted for discrimination or abuse. Gabbard, the favored candidate of many Assadists, Islamophobes, Zionists, & anti-Semites, is in the final stages of a moribund campaign & is simply attempting to whip up support among Hindutva partisans in the US so her campaign doesn’t fall completely on its ass.

(Photo is Twitter wall of Sheenie Ambardar. Although I have never followed her nor read her posts (since I detest charlatans) she apparently blocked me after Indian officials demanded I be suspended by Twitter.)