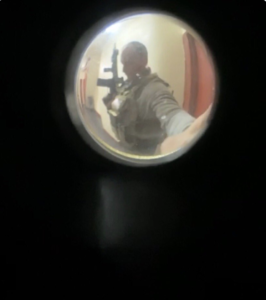 This photo was taken through the peephole on a door in the Bronx on Tuesday & was circulated by immigration rights activists & by NY Times reporter Annie Correal on Twitter. ICE officers carrying assault rifles were reported going door to door in an apartment building & threatening to use force to get in to rout any undocumented immigrants.

Assaults on the US Bill of Rights began with martial law in the Black community under the guise of fighting drug trafficking & continue with illegal search & seizure raids looking for undocumented immigrants. Either we stop buying the false & racist justifications & act to defend human rights or the Bill of Rights won’t be worth the paper it’s written on.