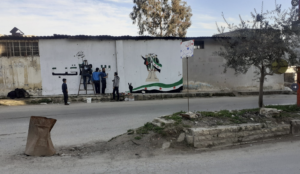 If Turkish bombers give some relief to the civilians of Idlib against scorched earth bombing by Syria & Russia, we would be wrong to get on our high-horse with denunciations of Turkish militarism even though its role in Syria for the past nine years has been entirely counterrevolutionary. But it’s a different thing entirely to promote Turkey’s bombing of Syrian warplanes as humanitarian or as a progressive development that should have started years earlier. Popular revolutions are not fought nor won with bombers. Never have been, never will be. Militarism is not the character of revolution.

Foreign intervention in Syria by Qatar, Iran, Saudi Arabia, Hezbollah, US-coalition forces has altered the character of hundreds of ground militias & strengthened the Islamist element, not unlike how Assad fostered the Islamist current to strengthen al-Qaeda & generate ISIS. Most books about the Syrian conflict address this problem, but only tangentially. In her book, “No Turning Back”, Rania Abouzeid discusses the problem only somewhat & says she could write an entire book on that subject. Someone needs to write that book because understanding the role & influence of foreign financing, training, & deploying of militias is essential to understanding the fate of the Syrian Arab Spring. Assadist propagandists have been able to smear the Arab Spring as entirely ‘Islamist head-choppers’. It was extremely effective propaganda because it confused & undermined solidarity by stroking the ignorance & hatreds fostered by the ‘war on terror’.

Those who believe that bombers conducting humanitarian interventions on behalf of popular revolutions against tyranny are the only thing that can save the Arab Spring uprisings have no faith in popular revolution but only in militarism.