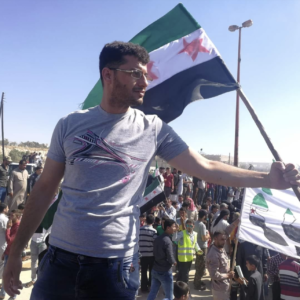 An account by a partisan of the Syrian Arab Spring.

I am M… I am from Syria ,Idlib, Marat Alnouman. I was an English teacher in one of Idlib’s school.

My father paid a bribe, and I was released from the jail. At that time my city Marat Alnouman was bombed a demonstration was in progress. I came back there to join the peaceful demonstrations against Assad.

FSA was created at that time to protect the civilians and a lot of parts of Syria was released from Assad. And later on ISIS and HTS appeared. They started fighting against FSA, but they didn’t fight against the Assad regime. HTS and ISIS were one part of Assad regime. They withdrew from a lot of “free” areas to allow Assad to retake control. Assad recaptured most territory with their help.

Right now, HTS are still in the city of Idlib. HTS has withdrawn from Marat Alnouman for the Assad regime. The people here in Idlib hate HTS the same way as they hate Assad. We have many demonstrations against HTS the same way as we did against Assad. Because of the so much bombing by Assad, and so many arrests, a lot of people have left Syria towards different countries. This is especially the case with Turkey who received about 3.5million refugees. Through the last four months more than one million were displaced from Northern Hamma , Southern and Eastern Idlib and Western Aleppo. This was because of the Assad regime’s and Russian warplanes which attacked and killled only the civilian population. Those one million moved near the Turkish border. Most of us live in tents inside the camps with very bad situation.

We will go back to our homes when Assad regime leaves them.