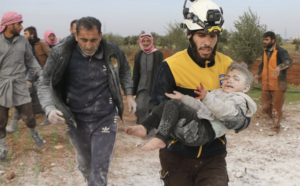 The flight of nearly a million civilians from Idlib to escape Syrian & Russian bombing is the largest exodus since the flight of nearly as many Rohingya fleeing genocide in Burma in 2017. Assadists & Stalinists deny the Rohingya genocide & blame the exodus on Saudi-backed terrorists in the same way they vilify Syrian refugees as terrorists. Today they’re circulating a video of Tulsi Gabbard appealing to her hate-filled constituency by calling Idlib “the biggest & most powerful Al-Qaeda enclave in the world today.” It’s her way of supporting Syrian & Russian scorched earth bombing. Yet Tulsi, who is one of Modi’s biggest fangirls, has not uttered one peep of protest against Hindutva mobs carrying out a pogrom against Muslims in northeast Delhi & has consistently refused to denounce the occupation & lockdown of Kashmir. There is a consistency in the politics of oppression, including not just the hatred of Muslims which motivates the ‘war on terror’ but the glorification of militarism to destroy the struggles of the oppressed.

As the Syrian Arab Spring approaches the final battles against the counterrevolution, Assadist & Stalinist ideologues are boasting that they will write the history of the Syrian revolution against the Assad regime. Their version will likely not include the necessary postmortems on the international left which abandoned all principles to support counterrevolution. Their triumphalism about military defeat in Syria will be short-lived since Syrians, Iraqis, Egyptians, Bahrainis, Yemenis, Afghans will rise again to finally dispose of dictatorships, inequality, & colonialism in the Middle East.

(Photo from Idlib via Syrian Network for Human Rights)