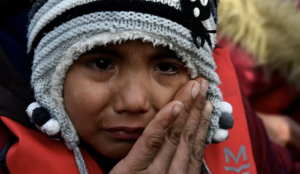 After Erdogan & the Turkish government signaled that the border to Greece was open & ordered police & border guards to stand aside, thousands of refugees from Syria, Iran, Iraq, Afghanistan, Palestine streamed across the border hoping to pass into Greece & find asylum in the EU. Turkish officials even bussed thousands of refugees to the border. Greek police, acting on behalf of the EU, attempted to force them back by spraying them with tear gas. Thousands of small children are among them & there are videos of the children screaming in pain while their distraught parents try to help them.

Turkey’s political motivation is not certain since Erdogan made an unsavory deal with Merkel in 2016, exchanging billions of euros for preventing refugees from entering Europe. Most speculation is that he is attempting to pressure European countries to assist him in his Syrian operation. There is plenty of speculation but little useful analysis thus far of Turkey’s game plan for its Syrian operation where it first began bombing to rout Kurds out of Rojava & is now engaged in combat with Syrian warplanes in Idlib. Turkey’s Syrian operation is certainly not to defend the Syrian Arab Spring on the threshold of its final defeat by Syrian, Russian, Iranian, & Hezbollah forces–with the military support of the US coalition.

We should demand Turkey open the border with Syria, which remains hermetically sealed, to allow Syrians fleeing Syrian & Russian bombing to leave; that it continue to facilitate refugees safely entering Greece; that it withdraw its military forces from Syria where its primary game plan is not the defeat of Assad but the routing of Kurds from Rojava. Taking out a few Syrian warplanes does not justify its continued military presence since it has done nothing to strengthen the Syrian revolution.

This photo is a frightened child arriving on the Greek island of Lesbos after crossing the Aegean sea from Turkey with other refugees.