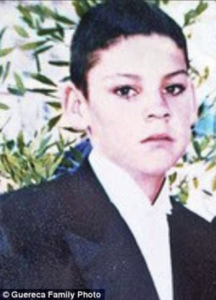 On June 7th, 2010, a 14-year-old Mexican boy named Sergio Adrian Hernandez Guereca who was on the Mexican side of the border between El Paso, Texas & Ciudad Juarez, Mexico, was shot by US Border Patrol agent Jesus Mesa. Although he was shot in the back, the Border Patrol alleged he was shot as a stone pelter. The FBI immediately became involved & justified his killing by saying he was a known immigrant smuggler & on their list of most wanted traffickers. It wasn’t long before politicians, in violation of international, human rights, & child welfare law, were attempting to associate all children refugees with human trafficking & prostitution as well. Like a ventriloquist’s dummy, the El Paso media began spewing the same rubbish against young Sergio. I was so outraged at the killing & its justification that when I could not find others willing to protest his murder, I went out several times alone to the government building with a placard demanding justice & also sent venomous protests to media for their coverage. This was in the Obama years.

After nearly ten years of legal action (including several appeals & reversals) by the family who wanted the right to sue the agent & the Border Patrol, the US Supreme Court, at the behest of the Trump administration, ruled yesterday that Jesus Mesa & the Border Patrol are immune from prosecution because Sergio was shot on the Mexican side of the border & thus his killing by a US Border Patrol standing on the US side of the border is outside US court jurisdiction. The legalese they wrapped around that isn’t worth repeating but it was about resolving the murder diplomatically with the racist, xenophobic Trump administration holding chitchats with the corrupt Mexican government.

What’s alarming about this ruling is not just the monstrous lack of justice for Sergio & his family but that it makes undocumented immigrants & refugees attempting to cross the border open season for the Border Patrol. They can shoot to kill with impunity which is exactly what the Trump administration wanted & what the Supreme Court handed them.

Sergio would be 24-years-old now if he hadn’t been shot by a beast. We continue to offer his family our condolences for his loss. May he Rest In Peace.

(Photo of Sergio Adrian Henrandez Guereca is from his family) 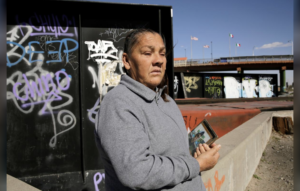 This is Maria Guadalupe, the mother of Sergio Hernandez, near the site of her son’s killing after recently being interviewed by Reuters.