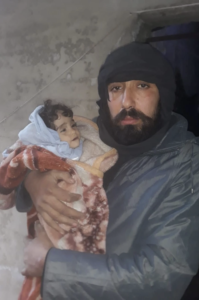 This is a photo of Ahmad Yassin Leila with his infant daughter Iman who froze to death earlier this month as he carried her to a field hospital to get medical care. They are part of the flight of nearly a million Syrians from Syrian & Russian scorched earth bombing in Idlib & Aleppo. It is one of the worst humanitarian crises of our times, described by some as ‘like the end of the world’.

The Assadist & Stalinist cult that usurped the antiwar movement met this past weekend in NYC to chart a course opposing US war with Iran. They support the carnage in Syria, calling it a liberation from US imperialism. Those who tail after a regime involved in the Syrian counterrevolution stand as a parody & mockery of antiwar principles & make asses of themselves by not understanding the character of extensive US air & ground intervention in Syria. They are so lost that today they are unable to mobilize more than a few hundred people (their last national demonstration in DC drew only 100 people) when the US is involved in at least six wars as well as genocide in Gaza. As the anti-Assad movement calling for US ‘humanitarian bombing’ in Syria learned the hard way, it is impossible to mobilize men & women of good will to support bombing. That is Antiwar Principles 101.