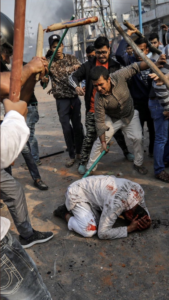 This piece is about Mohammad Zubair, the Muslim man being assaulted by a Hindutva mob in Delhi. The photo, likely to become one of the iconic images of this pogrom, was taken by Indian photojournalist Danish Siddiqui who the article only identifies as a Reuters photographer.

Siddiqui has won several photojournalism awards, including the Pulitzer with Indian photojournalist Adnan Abidi for their extraordinary coverage of the Rohingya flight from genocide in 2017. Their images from that desperate flight capture the terror & humanity of the refugees without dehumanizing them & are among the most iconic images. Siddiqui, along with Zeba Siddiqui (another award-winning Indian journalist for Reuters), also has extensive coverage of the occupation & lockdown of Kashmir which can be considered sympathetic with the Kashmiri struggle. He has covered the wars in Afghanistan & Iraq, the Nepal earthquake, the plight of asylum seekers, poverty in India.

Mohammad Zubair said he ‘can’t bear’ to look at this photo of himself being assaulted. In “No Friend But the Mountains”, Behrouz Boochani complained of the intrusions of photojournalists taking photos of refugees in their most vulnerable moments. That is not an uncommon complaint from the subjects of photojournalism, especially those in crisis situations where their vulnerability is witnessed. But others welcome it as a way to take war & genocide out of the realm of power politics to tell the story & humanize those suffering from war & genocide. This image of Mohammad Zubair is worth a thousand Hindutva lies.