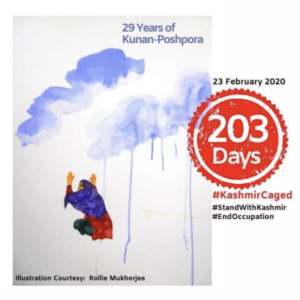 The night of 23rd February 1991 will forever be haunting the people of Kashmir as one of the darkest and most brutal incidents of war crime. Over 300 army men raped over 100 women and tortured nearly 200 men through the night. Men were taken out and beaten, humiliated, electrocuted while the women, children (as young as 8) and old (even grandmothers) were brutally raped in their own homes.

The book “Do you remember Kunan Poshpora?” brought out by five women activists who grew up in the aftermath of the violence bring together records and testimonies from the horror of the night and the stigma, apathy, indifference that the survivors had to go though for decades and their fight for justice.

According to the survivors, “rape” is not the apt word to describe what was done to them; it was not rape – it was war. A war that did not spare minors, disabled women, pregnant women, mothers, grandmothers. House after house, had the same horror story of 5 to 6 army men barging in with guns and liquor bottles, separating the women and raping them at gun point. In some houses, one or two women and in some an entire household of women were brutalised, most in front of other women.

One of the survivors, who was in her advanced state of pregnancy gave birth to her baby with a fractured arm, three days after. Her father narrates how his grandchild became a part of war even before coming into this world!

While each testimony will shred our hearts to pieces, the worst was yet to come for these women. The army denied of any such incident, the government denied, the courts, and so did majority of Indians who called it a propaganda by militants. Despite their bloodied clothes and bruised and bite marks ridden bodies bearing witness to the dreaded night, they were questioned over and again and asked to produce more proofs.

It took 23 years for the Supreme Court of India to acknowledge that the mass rape did happen! But even till date the justice eludes..

Those who raped and tortured these women, men and children did it with impunity, as a part of their war tactics to occupy and subjugate the people of Kashmir, they did it in their uniforms and as many testimonies confirm, with their commanding officer just a few metres away shouting to keep the noise down!

As much as the Indian state, judiciary and defense forces would want to forget 23rd February and wipe it off their memories, the women of Kashmir refuse to let them go unaccountable. We stand with the women of Kashmir who have over the years been made to keep the memory of the traumatic night alive, who have survived, yet not been allowed to forget the tiniest of detials of the brutalities done to their bodies, their lives, their memories, as they observe today, February 23rd as Kashmiri Women’s Resistance Day! Pakistan and India people’s forum for peace and democracy forum for peace and democracy….@pipfpd