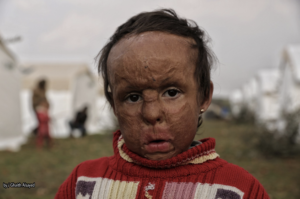 It’s contemptible enough to support Syrian & Russian scorched earth bombing of Idlib & Aleppo. But it staggers the imagination that Assadists are referring to the flight from that bombing of nearly a million Syrians (who they portray as all terrorists, takfiris, & ISIS) in sub-zero temperatures as “a political conflict, not a one-sided “humanitarian” tearjerker”. That’s how low you go with cynicism in an age of genocide & counterrevolution. That is the political character of Assadism.

The photo is a little Syrian girl–not a takfiri–who was burned & disfigured due to a stove used to heat in the IDP camp where her family fled. ‘A political thing, not a tearjerker’!? Actually, it’s an apocalypse.