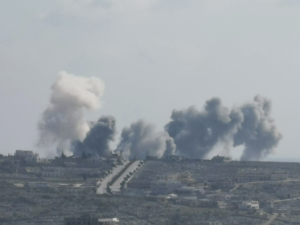 Mr. Alhamdo (I believe a nom de guerre) is a schoolteacher & citizen journalist who reported from East Aleppo during the four year siege by bombers & ground forces that ended in December 2016 when Syria, Russia, Iran took over. Mr. Alhamdo calls it the ‘holocaust of Aleppo’. He continued in reduced circumstances & as a hunted man to report on social media after evacuation from Aleppo. Yesterday, he reported that after rockets hit hospitals next to his house & his children were crying in fear, he fled with his wife & children taking nothing but stopping to say goodbye to his in-laws. Syrian forces & their allies have Aleppo & the surrounding countryside completely under their barbarous control & are a serious threat to citizen journalists & partisans of the Arab Spring.

The problem is, there is no place for them to go in sub-zero temperatures. Syrian & Russian forces are shelling the IDP camps & Turkey & Jordan have sealed their borders against refugees. Of the 3.6 million who have managed to cross into Turkey, 20,000 have drowned in the Mediterranean trying to cross from Turkey to Greece to seek asylum in Europe. There are 6.7 million Syrian refugees overall & at least 7 million internally displaced persons. That is over 60-percent of the entire Syrian population. In what socialist scripture can we find this apocalypse described as liberation?

We wish Mr. Alhamdo & his family godspeed & believe he & other Syrian refugees will set the political & historic record straight against the monstrous lies of Assad propagandists.