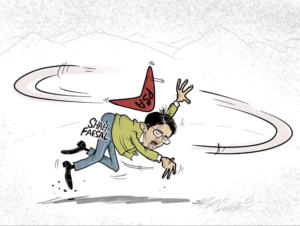 What Goes Around Comes Around

For those who do not know, Shah Faesal is a collaborator attempting to reinvent himself as a leader of the Kashmiri freedom struggle. He was recently arrested under the Public Safety Act (PSA) which allows indefinite detention without charges–an ‘illegal law’ used to detain thousands of Kashmiris. No one approves India’s detentions of any Kashmiris, but this arrest may be more like the detention of collaborators Omar Abdullah & Mehbooba Mufti (in luxury suites, not the Indian gulag) in order to reinvent them as political prisoners & leaders of the freedom struggle. It is Kashmiris, rid of Indian colonialism & occupation, who should prosecute & detain these collaborators for their monstrous crimes against Kashmiri men, women, & children.